I just found that in Dosbox (don't know from which version on) there is a magic button (or combination of buttons) for fast forward (aka unlimited speed, aka speed disaster, etc.). Which is great when you want to skip fast some parts of a game or demo or for any other reason. It actually works very nicely, depending on the machine cycles you have set, things might go quite fast and even the music is funny.

My dilemma is that it enforces some bad habit I have with demo watching and never told you. When I am in hurry yet I want to see some old demos I didn't knew before, searching maybe for an effect or a screen that could impress me, instead of watching the demo as a regular scener watches them, I press the fast forward after I have seen each effect. Ok a logo, fast forward, stop there, nice blobs, ok I saw them, fast forward, wow great voxel! Fast forward, etc, etc.

I used to do this with emulators in AtariST demos, Spectrum, AtariXL, C64 and everything that has an emulator enabling fast forward. I am wondering now if WinUAE for Amiga does have one and I don't know it. Or about CPC? (Winape32 has the option but you have to do it from settings. I want a button that goes fast forward while you pressed it and then you can release it and everything goes to normal). Oh no!

At least when I want to watch again some old classic demos I don't do this. There are two kinds of demowatching, the one where you want to enjoy the demo as a demo and the one you are in a hurry to pass through it's parts in the hope you will enjoy a good effect. Also if in the middle of this heresy I discover that the demo I fast forward is actually worth it for it's flow and transitions and presentation then I do the exception to quit and lay back and watch it from the beginning in it's normal pace.

Imagine what would happen if I watched demos with friends and I suddenly touched that keyboard :). I did it in other ways though, like pressing and un-pressing manically the turbo button on my 386 at each part while my brother was watching, and I was talking to myself: Wow, the gouraud shader runs smooth even without the turbo button. Wow! Like who cares? Hahaha!!!

I am just insane about coder effects and performance. I do it in dosbox by changing the cycles up and down while watching a particular demo :)

p.s. Actually dosbox has become really good. There is even a mode (if you set machine to vgaonly) that tries to emulate the VGA properly with it's right timings so that games and especially demos that might use hardware tricks to do raster effects and splits and cooper bars and all that stuff work. I tried it with my 256b intro kefrens256, a quickbasic secret part for Deedline Sax where I was displaying similar stuff, my CPU meter in demos, then tried it also on some PC demos using tricks (DoWhackAdo, David CopperField work great, but Copper by S!P doesn't work very well). Also you can choose the CPU strictly, for example a 386 only CPU to not have to emulate 486 or Pentium if you don't need to, etc. And that's not the only cool think about new things dosbox brings. I am curious to see what the next versions might bring.
Posted by Optimus at 20:31 No comments:

I am not sure why I can't get into this link.

I am not sure why the link to this story from slashdot has zero comment (the date was somewhere between yesterday and before). I even posted a single one wondering why.

They forced the pages go down so fast? A damn conspiracy? Or am I just paranoid?

Say I don't care,. I will write something else here.

The last time I got a new laptop I uninstalled the damn antivirus that came with it. It made my system crawl like hell (also it still does because it runs Vista :P). It bugged me with false positives (any antivirus does it and imagine you want to get some people interested into the demoscene by showing the marvels of 4k intros. An antivirus just drove them away :P). It just annoyed the hell out of me at every action I tried to take!

And then someone comes and tells me, yeah antivirus software is just like that, but there is this or that one (name) that was amazing and not just like the others. And then I discuss it with another friend about the same antivirus and he tells me, what? This is the worst ones, crawls your system, etc, etc. I guess it was an older version that was ok? How do I know that the best antivirus won't be a total crap tomorrow?

I don't know but every time I install an antivirus in my system I am in doubt. My brother told me that antivirii are the real virii here. They clot your system, annoy you with warnings, at least they don't delete your HD yet. I might be sounding like those people who refuse to take vaccinations. I am probably gonna pay it in my system one day..

And all these because of the stupid people who think it's cool to write a program (or copy it from someone's else source most of the times) that destroys our computers. Hell,. I am gonna go back to CPC where nobody makes any virus anymore (do they even exist?). Wait,.. I can't :P

Ok, I guess when I have a virus I'll throw one of these programs, kill the threat and then uninstall it again. I did this before with spyware kind of threats and it worked :P (Yeah, yeah, I know. Those programs also protect you before the bad is happened, but I still like to uninstall the when I don't need them)

I totally don't make a sense. That's because I am a computer hermit XD

p.s. Another one with the story that is up atm is here

p.p.s. Actually the original link came back. I know I am paranoid here :)
Posted by Optimus at 12:56 No comments:

Why I still play doom?

Many people (mostly newschool gamers) have asked me, why do I keep playing this highly pixelated (texelated I would say :) game from 1993? There are so many modern FPS with next generation graphics, more interesting story and lot's of more interaction. Why?

If they knew I am also into level editing for Doom they would wonder twice. But both playing and level editing seems to be so much more fun in Doom than modern FPS. About playing, I do sometimes play modern FPS, but they start getting so complicated or realistic that I just prefer the arcade style of old good Doom. As for level editing, I admit Doom is the only FPS I have tried to create a level. I only have seen how a modern level editor looks like when I tried to do it with Max Payne (because I was helping a friend who wanted to learn it for a project) and only for a little while. But all I see is that to create mods for modern FPS can be far more complicated than in Doom. I simply don't have time for that. Also, the limitations of the doom engine allow the level designers to challenge themselves by trying to overcome these or find tricks to make "impossible" things running in the vanilla doom engine. And the community is BIG!

How is this happening? What is so special about Doom that many people are still playing it, lot's of ports are coming out, level designers create hundreds of maps and some of them still show new never seen before ideas and amazing beautiful design and the community seems to be much bigger than the ones in modern FPS?

One article that attempts to answer that is here.

Also, as a complement I give you this link and a screenshot taken shamelessly from his blog because I like the comparison. The guy is, as I read the news in doomworld, a lead designer of Bioshock 2 and he just decided to remake a level from Bioshock 1 into old good doom. Wow! 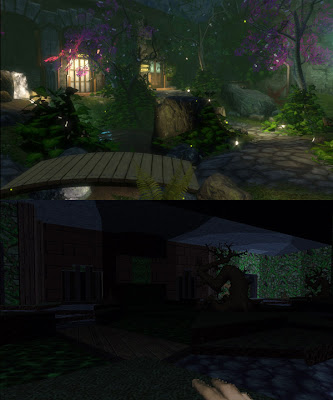