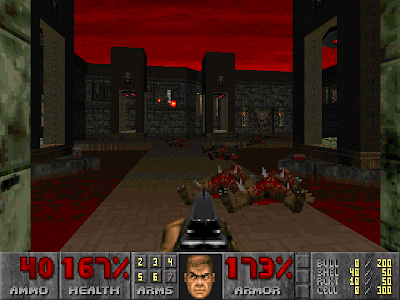 It's funny! When I loaded this WAD, I had the feeling of a double deja vu. I thought I have played this before twice, the second time wondering if I had played this before. For some reason it appeared three times in my hard disk (normally, I download new WADs and put them in a directory, later I delete them or put onto favorites. Now, this one appeared for a third time in my WADs to play dir).

Yet it was so nice that I wasn't bored to play it for a third time. I am even inspired now to continue creating some old levels I started making months ago.

I love Paul Corfiatis levels. They just have the right balance of gameplay, design, architecture and size. Levels with excessive details are interesting, although when you can create atmospheric worlds with more simplistic geometry yet still enough detailed then it's a must. I like minimalistic worlds that inspire me to imagine that I am in there. I like interesting architecture. I also like a kind of gameplay that is not too hard yet it provides enough action. And sometimes few sets of interesting traps. Other WADs overdo it with detail (which is interesting though or nice to look at) and difficulty (this one is not interesting, just annoying).

I've just seen that enough time has passed since I last posted something about a doom wad, yet there are quite more good ones that I should one day review. I just love playing doom wads and especially taking nice pictures of interesting looking spaces and writting reviews about. 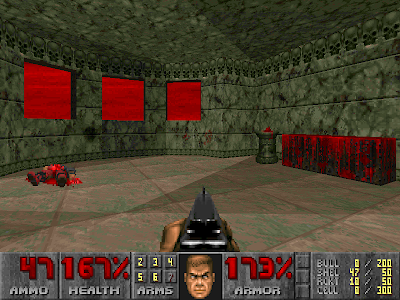 Haha, I am in good rare mood for coding!

Funny, especially during the time I was supposed to work for my university assignments and not for personal fun projects. I don't know why I have so much mood for hobbyist coding right now (maybe I should do a demo?) but I hope it keeps that way. And I hope to finish my courseworks too in parallel (although some of them require coding too).

Ok, as you can see in another blog, I just got a dingoo and tried compiling something for it. Although my attention swifted to Wiz. It's funny, I had bought Wiz for months but I didn't tried to develop something on it because there wasn't a proper windows devkit. Later I installed Ubuntu just for that, although I didn't used it. Recently I read somewhere that actually, the older GP2X applications can run directly on Wiz sometimes, if the SDL libs are compiled dynamically. It's so compatible that games like Flesh Charmer just run in Wiz by trying to execute the old GP2X file. And 2x/3x times faster of course. Although the vast majority of GP2X apps are simply compiled statically (there was a problem with dynamically compiled apps, some didn't worked, maybe if you firmware was upgraded, so it was better to have SDL libs inside the executable even though the size was getting bigger for just a simple thing).

Anyways, I found out that the only thing you have to do is to use DevkitGP2X for the old GP2X to compile something with options for dynamically compilation and this will run perfectly on WIZ too (you also have something that is compatible with both the GP2X and the Wiz, wow!). And so I thought, when in the past I avoided getting into burden, that nowadays if I can compile GP2X stuff, it wouldn't be so hard to do it for Wiz too. I then found a devkit in a chinese site that installs a devkit on windows with an example and it does it automatically and also uses DevCPP and dual compilation, one windows that you can see the results on a window and one gp2x, so you could even take some old SDL code from PC, compile and run it properly on windows project and be sure that you could just compile it with gp2x switch and have it ready. It's so portable and easy that it makes me cry! I took a voxel plasma SDL effect I had done on PC and with almost no modification I had a gp2x version in fifteen minutes. Wow!

Then, I got some strange mood to start coding a new rasterizer. I had a discussion with a friend and I decided to start the new one from scratch even if with rasterizers it's scary because they are complex boring beasts. Normally I would avoid coding a new one especially if I lack motivation, but yesterday I had so much mood that I actually started. The focus here is to code carefully and try to make it as simple as possible. Because usually, my last ones were bloated. The very last unreleased version suffered from some bugs and still was big enough even if I wrote stuff in easier way and it was two times faster than the old on PC (haven't tried on GP2X or Wiz though). It also uses a way they say it's bad for the cache but I will just try and benchmark both versions on my Wiz or even GBA. My focus is to carefully make one as simple as possible at first (with only flat shading for the beginning), benchmark what is the best and gradually upgrade it. I want it to be a suitable simplistic and fast as possible rasterizer for old hardware, especially the very slow GBA. I want to make a very simple tiny 3d engine and not the last beast I was trying to make last time (very organised or bloated). Who knows, maybe I'll do a GBA demo with this one..

Ok, going back to? Damn,. I have to do courseworks for university..
Posted by Optimus at 17:13 No comments:

Imagination! Try to make out your own limitations or rules for demos. Shortest scrolltext? Longest maybe? Use a fucked up restricted palette and try to make something good out of it? Make a demo where only additions is allowed and no mul no div no sine no nothing? Make a demo out of a specific simple effect or routine? I would like to hear such compos around. Or maybe create some weird unofficial random rules for a demo I'd like to make and try this out (E.g. throw a D&D dice and determine that I should make a small demo with only plasma, glow and shade bobs, using that specific palette of 32 colors, each part shouldn't be longer than 5 seconds and the music should be a mix between trip hop and polka :)

My new Dingoo has arrived! 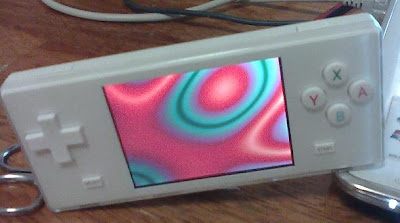 First impressions? Surely it's not as good as the Wiz (but I already knew that and the price is lower anyway) but I am quite happy with the new device. What I like is that in contrast with the Wiz, it's coming with several emulators (GBA, NeoGeo, Capcom System 1,2, NES, Mega Drive, SNES) integrated in the menu and you don't even run the emulators, you just select a rom and it runs directly the same way you would run an application or native game for the machine. It comes with more games seemingly made from the company who made Dingoo, few of them aren't that bad, like a 3d alone in the dark/resident evil style game called 7 days. And the 3d engine is quite good (also, software rendered, no 3d accelerator on the device) and is also used in few more games provided by Dingoo games division.

What might be better than the Wiz is the fact that the battery time is quite nice (7 hours or more) and what additional it has that the Wiz might miss is there is also a radio. A TV-out port is also on the device and even a cable is provided in the box (I am not sure if the wiz has tv-out but it seriously didn't come with the box. Also, what is enjoyful is the vast amount of Chinglish (all your base are belong to us :) both in the manual, website and game menu. Firmware is Fureware, Video is Wideo, also there are two options with funny names, '3D Game' (to run any APP files, from games to applications) and 'Interesting Game' (to run emulator roms). Just funny.

I also tried the official devkit for windows. It uses their own SDK (s2dsdk) that was maybe used for the developing of their own games. It's quite object oriented and I had to use to send pixel objects to the framebuffer which maybe does some inner conversion because a simple rendering proved to be not as fast compare with everything else I have tried. I'd like to see if there is a more low level to access the frame buffer. Many people have moved to Dingux which is a linux port for Dingoo and a lot of released emulators and ports of games require Dingux (which is unfortunate if you haven't installed it yet and you want to run regular Dingoo APP files, you find not many stuff). I had problems with mounting the device in Vista but in an XP laptop it worked just fine. I also had problems updating the firmware (there is an official and an unofficial from homebrew devs, most people prefer the unofficial). I hope Dingux doesn't need a new firmware to be installed..

I also managed to compile something for the Gamepark Wiz under windows. Originally I had installed Ubuntu to compile with the linux devkit (there is no good Wiz Devkit for Windows yet :P) but I gave a modified devkitGP2X a third try under windows and this time I succeeded. I get very good framerates. And it's all SDL. So easy to port! 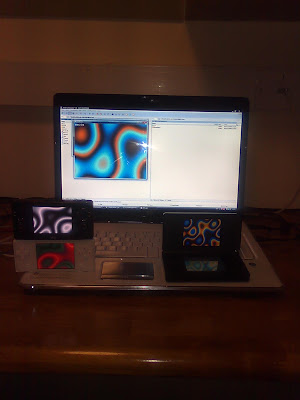